Four Corners of India — Part 1. The Western Corner of India

Last time we introduced you to Chiranthana — one of the most adventurous riders in Bangalore. This time we are following Chiranthana on the first part his journey to the West Corner of India.

The 2000km to the West Corner of India

Chiranthana, where did you start and end the 1st part of your the journey?

It’s a Four Corner Ride, hence, I started from Bangalore and finished in the Narayan Sarovar near Koteshwar in Gujarat which is the Western point of my journey. It took me 5 days to complete this part of the route.

The starting point was from Bangalore University, Jnana Bharathi Campus, Bengaluru, in Karnataka. My target was to reach the West End of the country in two days, which was about 2000 kms and I knew I can do 1000 Kms per day. So, in just about 2 days, I had to be in the First Corner.

I always liked and loved to ride at Night times, not because of cold air, but because of the challenges it posed. My Initials were R.C. meaning Ramaiah Chiranthana, but my alias was Royal Challenger, as given by my fellow riders.

Surprised onlookers — only 400km from Bangalore

Chiranthana, what special moments do you remember from the first part of your journey?

So I left from the Bangalore University. My first halt was near Toll Gate of Nelamangala. This is where I intended to update myself on the Whatsapp and Fb messages. I thought I will be no longer seen on social media for about 15 days or so. Hence, I stopped by to send pic to my friend who enquired where I was.

Every hour, I took a break from the ride, however smooth or hard it was (both the seat and the ride). It was my strategy to take an hourly break or every 100 kms or so. This made it more convenient for me to ride.

At the break of sunlight, I was almost near Harihara. Stopped to have tea. Got entry in my log book, continued till Hubli.

I was fully loaded in terms of my clothing. Just imagine my appearance: High ankle boots, Jeans, T-Shirt and Black Jacket, riding on an Army Green Bike, full faced Green Helmet, with Huge Double Saddle Bags at the back and a backpack to complete.

Additional accessory was the Mobile Holder with Charger bang in the middle of the Handle.

The onlookers wherever I stopped, used to enquire about my origin. When I replied the were really surprised. The used to pat on my back, saying… «You are riding alone from Bangalore? Great man!» And that was only about 400 Kms from Bangalore!

Wanted to visit Rani Chennamma Circle. It is famous for Kannada Movie Shootings and one of the famous song sung by Dr. Rajkumar — the famous Kannada Actor of all times — “Huttidare Kannada nadalli huttabeku”. It was pictured in this same spot.

However the backlight was severe and I didn’t have the front view of the Rani Chennamma Statue. The circle was crowded and there was absolutely no parking place.

Then I saw two traffic policemen at a chowki and told them about my ride. They immediately made an entry in my Log book and accompanied me till the frontal view of the statue and cleared the area for taking selfie! Achievement!

Had to leave, so thanked them and left for Dharwad, where there is Dharwar University. As my bad luck would have it, an important meeting was scheduled on that day and both the Registrar and Vice Chancellor were unavailable for me.

I decided not to stop. So did the Rain!

Continued my journey to Goa.

My Don (Yamaha FZS) service was due by then and I thought the best place was Goa Yamaha Showroom, wherein, I can get it serviced, also I can get an entry in Log Book of Goa. By the time I finished the service it was sunset and I had covered only about 700 Kms in 20 hours. My bike was fresh from service, engine oil changed, chain lubricated… I thought of carrying on towards Mumbai.

The rain gods were planning something else I feel. It started raining but I was prepared for that also. I simply put on my raincoat and continued. As I was nearing the outskirts of Goa, it started raining heavily and the road was single. The Headlights from the opposite vehicles made me think twice. I found a lodge near the exit of Goa and decided to take my first night halt.

The next day was a Sunday, 19th June 2016. It was the International Motorcycle Day which was being celebrated by the biking fraternity all over the world, and I was celebrating by riding from Goa to Mumbai!

The easiest and smoothest ride was by taking the Belgaum road and the 4 lane highway to Mumbai via Pune. I decided otherwise. When I had a look at my mobile screen, which had activated Navmii (the best riders app, I felt), I saw a word – Ratnagiri, between Goa and Mumbai. I decided to travel on that route instead of taking the highway. The rain gods were at office, very busy. Since it was broad day light, I decided not to stop. So did the Rain! It was all wet ride the whole day.

It was almost evening when I reached Kashedi Ghats. Have to warn young kids who are just starting to ride their toys in the Highway: Do NOT try this Kashedi Ghats during Night. It is definitely not advised for the beginners. Just because they may lose their interest of night riding. Kashedi Ghats at night in the rain is a deadly combination and nothing can be more challenging.

After the memorable International Motorcycle Day (night) I was at Panvel at Midnight. Checked in at a Police station at Maharashtra and got entry done in Marati.

Still 800km from the target

The next day was June 20th one day earlier than the 2nd International Yoga Day. The rains had their party on Sunday and left me with myself on Monday. When I entered Gujrat, met RTO Officer and got the entry in Gujrati. Had tea and continued my journey towards Surat.

At breakfast time, in a dhabha in Gujrat, I was surprised to be asked “ënu thagothira?” meaning what will you take? In Kannada! The waiter had been in Bangalore for about 6 months and had learnt a bit of Kannada. Once фgain the rain showed up and as usual, since it was daylight, I continued my journey. About 4 am in the wee hours, had to take rest in a Coffee House.

I was still around 800 Kms from my target. I Had made up my mind to celebrate yoga day on the shores of Western end of India.

Continued my journey from Surat. Met a group of riders from Navi Mumbai ‘K Bikers’ who were on their way to Leh. Wished them safe journey and continued to Vadodara, Ahmedabad.

The West Corner of India

By the time I reached Surendranagar in Gujarat, it was past midnight and had to sleep on a cot in a puncture shop. Woke up around 7am with 400+ kms to Narayan Sarovar, went towards Bhachau and took a deviation towards Gandhidham, Mandvi, Naliya.

Had to fill up my petrol tank. The Bunkwalas welcomed me and made me to take some rest, ordered tea for me and after a nice conversation, left towards my Goal of the day. It was already 4 pm and almost 200 kms to go, I was a bit worried if at all I could reach my destination within day break.

The longest day of the year

Until now the speed of my vehicle was about 70-80kmph I had to raise it till 90s. At last when I reached Narayan Sarovar, it was around 7.30pm. I was surprised to see the sunlight still intact. It was the longest day of the year and Yoga Day. Met some visitors, had discussion with them, taught them some basic principles of Yoga, the Omkara and Single Nostril Breathing.

8 pm, I was mesmerised by the Music of the Pooja in the Temple. Seemed as if all my strain of riding wasn’t there at all. Night halt was arranged in the hostel of the temple and the much needed rest of the tour was taken.

Hope you enjoyed reading about the first part of Chiranthana’s journey to Four Corners of India.

Next time we will follow Chiranthana from the West Corner of the country (Narayan Sarovar near Koteshwar in Gujarat) to the North Corner (Leh in Jammu and Kashmir).

Motorbikes India (MI) is an online magazine about motorcycles in India. Motorbikes news, articles, clubs & events, routes, insurance, finance, maintenance & safety. We welcome contributions, from anyone that is enthusiastic about biking. If you are part of a motorbike club in India, please be sure to keep your club info and events up to date in our clubs section.
Previous Another Weekend of Motorcycles
Next Four Corners of India — Part 2. The Northern Corner of India 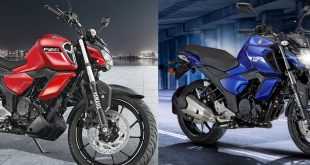 You, Will, Have to Pay More Now for Yamaha FZ FI, FZS FI 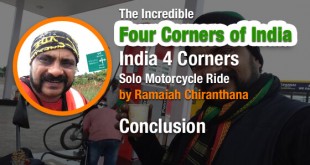 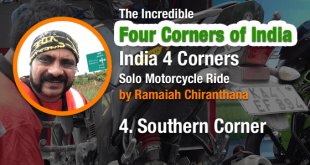 Four Corners of India — Part 4. The Southern Corner of India 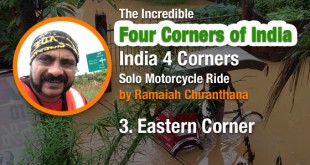 Four Corners of India — Part 3. The Eastern Corner of India

In previous article together with Chiranthana we visited the Northern corner of India. It was …