The all new TVS Apache RTR 160 seems is built to carry forward the legacy of its predecessors.  Launched back in 2006, TVS went on to give the motorbike a complete makeover in the year 2012. It would only be correct to say that TVS has established itself as one of the top players in India’s market for motorcycles. Founded back in 1978, the company today is the third biggest manufacturer of two-wheelers in the country.

At one point in time, TVS had collaborated with Japanese automaker Suzuki, and they had a fruitful partnership that lasted 19 long years. Since then TVS has come a long way and gone on to produce some of the finest motorbikes in the country. Apache being one of its most successful motorbikes, has sold over 2 million units ever since its launch. It was the first ever motorcycle to come with a petal disc brake and became an instant favourite of masses.

The Apache 160 RTR is perhaps the only motorcycle in the country to come with a 160cc engine. Most bikes however, in the similar category are either 150 or considerably more. The RTR stands for Racing Throttle Response, dubbing it as a machine made for speed. It got its sporty and muscular look back in 2012 with the entire revamp it received. So, we couldn’t wait to test drive its 160cc 2017 version. 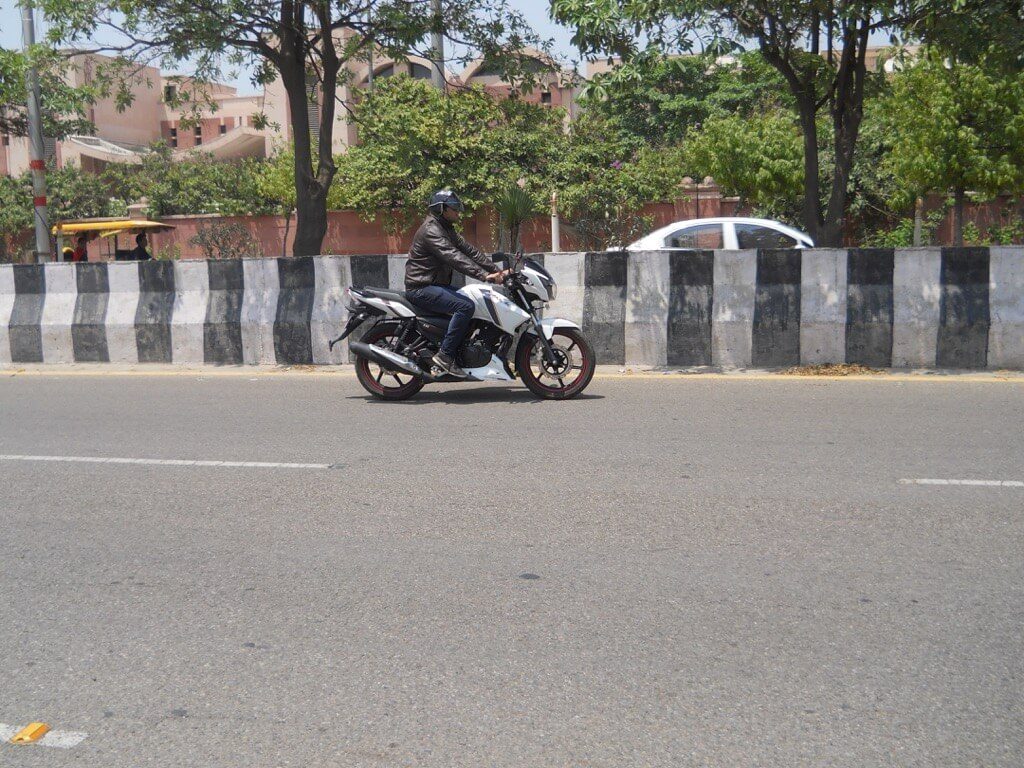 After making a quick call to our authorised TVS partner – Aditi Motors, I confirmed with them the day of the road test. Hence, after a two days wait, I went to the showroom to get my hands on the all new TVS Apache 160 RTR. After having a chat with the showroom manager on latest TVS launches, he directed me towards the Apache motorbike I was to test drive. 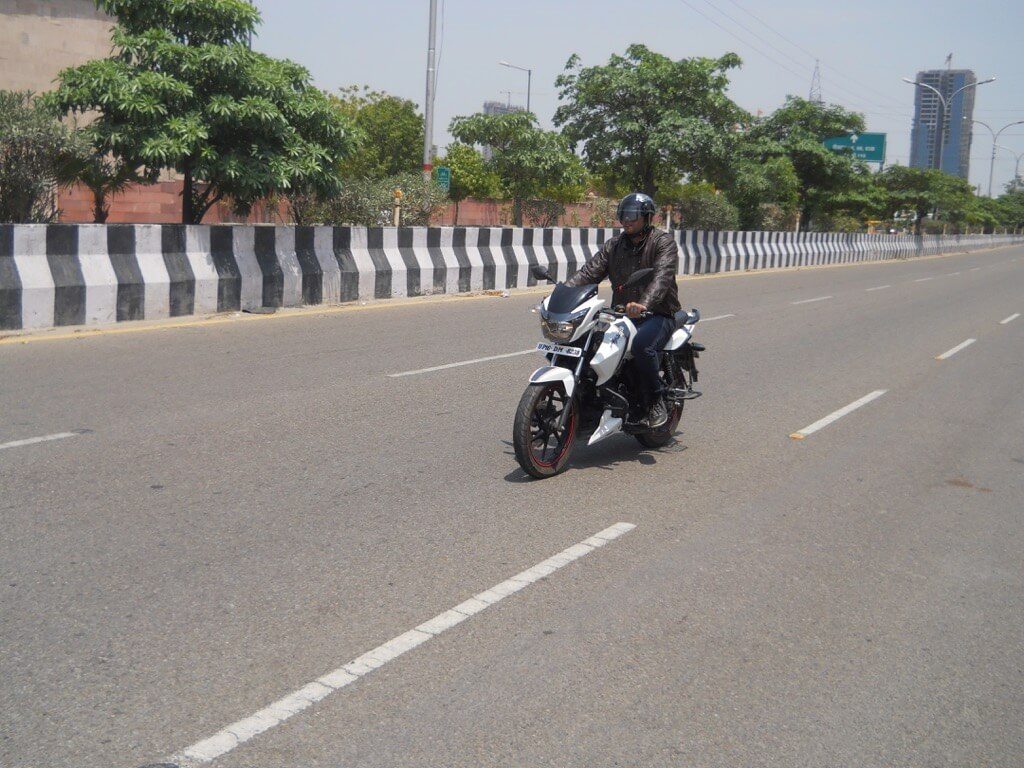 At first glance, I got to admit – I was quite impressed. On the outside, it does appear somewhat superior to many motorcycles in the category similar to its own. But did it succeed in gratifying us overall? Read on my complete review to find out! 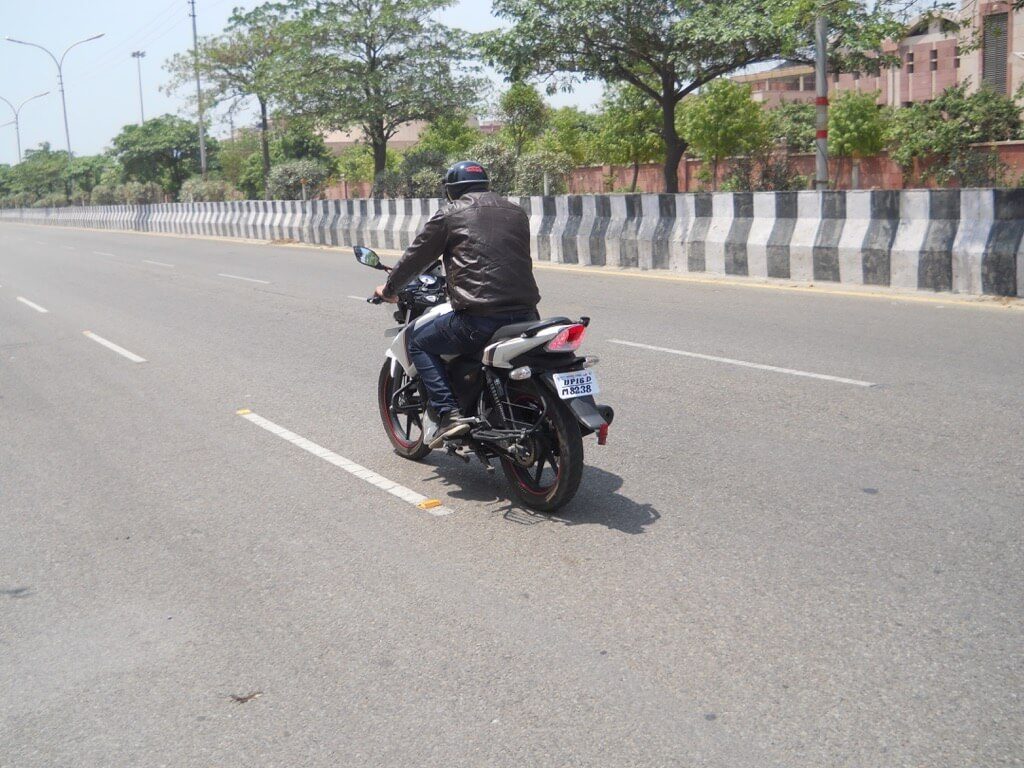 In comparison to its year old version, not much has changed in the 2017 version of TVS Apache RTR when speaking of design. However, it was the headlight of the motorcycle, which instantly captured my attention at first glance. 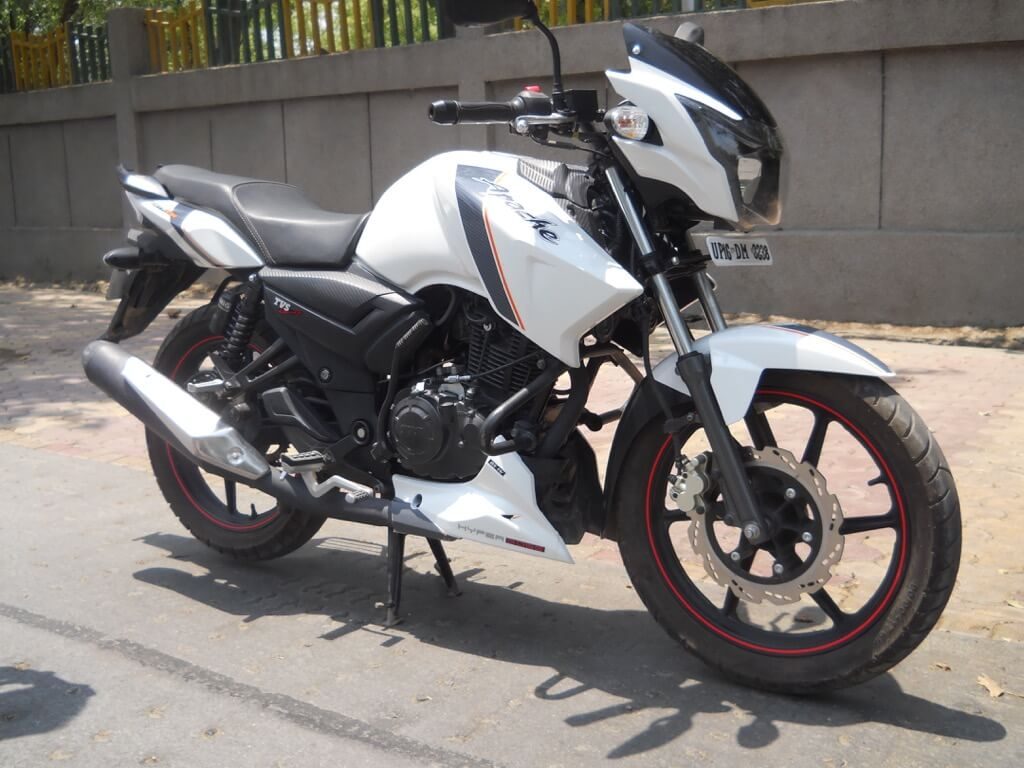 It has this beastly design, which makes it almost seem like a face of some creature staring right at you. The only upgrade it’s received from its older version is in form of a BS1V engine.

There’s this raw edginess in the design and its instrument panel is both a beautiful blue LED and analogue at the same time. The design of its body especially on the fuel tank is quite aerodynamic, which makes it seem like a machine built for speed racing. The tail light is very tidy in both appearance and design as well. The entire fit and finish of the Apache 160 RTR is definitely worth praising.

The overall look of the motorcycle is sporty and it is essentially build like a racing machine. Featuring both electric and kick-start options, it’s been made available in White, Black, Matte Grey, Matte Blue and Matte Black colours. Only last week, TVS introduced the Apache RTR 160 in a Matte Red colour option as well. The staff at TVS showroom stated the reason for this was due to high demand by customers for the bike in that colour.

TVS bikes are acclaimed for connecting with the public and delivering what is expected of them. It’s no surprise that Apache has managed to endure the test of time and still going strong with sales after all these years. However, does the new BS1V version of the Apache 160 RTR live up to the legacy of its predecessors? I was keen to find out and following’s what was revealed during its test drive.

The Apache 160 RTR comes loaded with a 4 stroke, single cylinder engine that as a displacement of 159cc. Weighing at just 137 kilograms, it’s as light as a motorbike can get. The motorcycle managed to start smoothly on ES and when it came to kick-starting it, it does require some effort on rider’s part, especially those who are not used to it. As soon as its engine comes to life, you are greeted with exhaust notes resembling that of most sports bikes out there on road.

On disengaging its clutch, the motorbike swiftly put itself into motion. Riding it across city roads at 30-40kmph felt like a breeze, as it easily made its way past dense traffic. Both its brakes were on point and did a tremendous job at halting the motorcycle effortlessly. Apart from this, the seat of the bike felt quite comfortable between my legs when the bike was both still and running. Hence, in this segment, it delivered a commendable performance indeed.

To get a number for Apache 160 RTR’s top speed, I couldn’t wait to take it ahead on to the open highway. Once reached there, I revved up its engine and pushed it further to entirely test its mechanical engineering mettle. The motorcycle jetted ahead and hit a fantastic 120kmph!

However, at this point its exhaust really started making an unpleasant noise and its engine went into a worn out mode for a few good seconds. The handlebars did a great job at holding the alignment of the bike and it ran perfectly throughout the distance covered.

The fuel tank of Apache 160 RTR has a storage capacity of 16 litres and an extra 2.5 litres which can be kept in reserve. This makes it a total of 18.5 litres, which is not only sufficient but lot more than what motorbikes in its category are built to hold in.

When it comes down to the mileage, it uses a good one litre to run about 40-45 kms in city and around 50 on speedways. This again is where it faces some serious competition from many of its counterparts as most other bikes in the category easily deliver a 60.

Not much has changed design wise in the new version of TVS Apache 160 RTR. However, the headlight and tail light of the motorcycle are the crowning glory in its edgy design. The speedometer looks a mix of both the classic and modern design that’s technically radical at the same time. 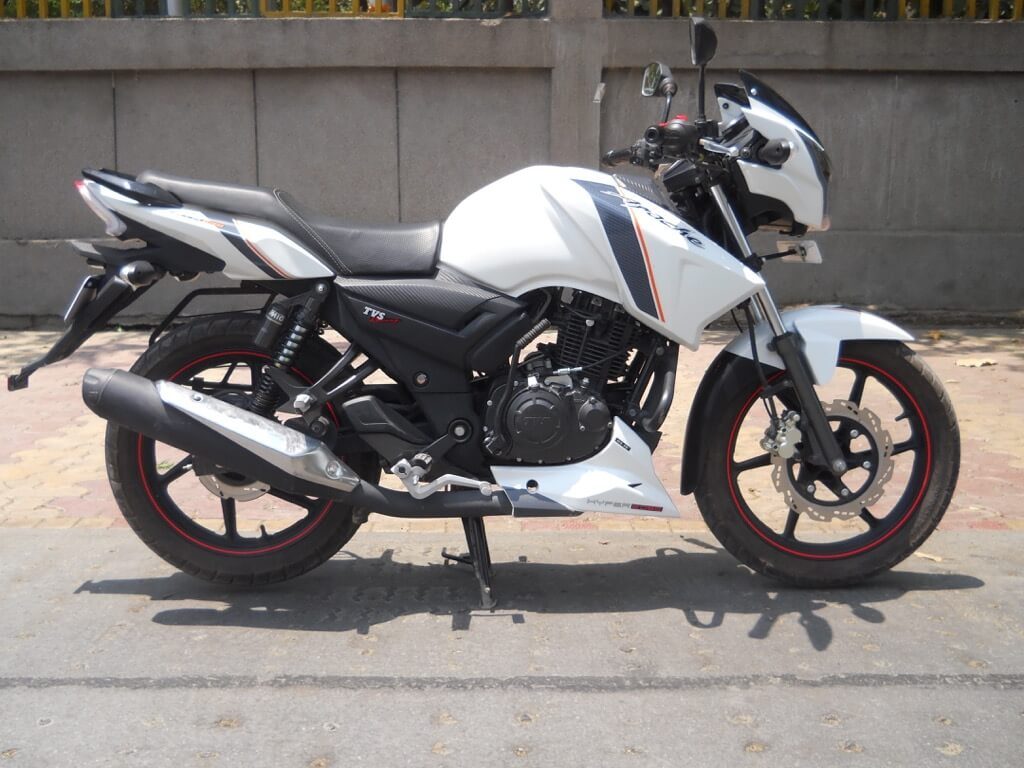 Most of the graphics on the motorbike are placed on its fuel tank and would only be safe to say that it looks pretty neatly cut-out on design. For a rider who is of average height, would easily be able to mount on its seat and ride the motorcycle in a comfortable position. 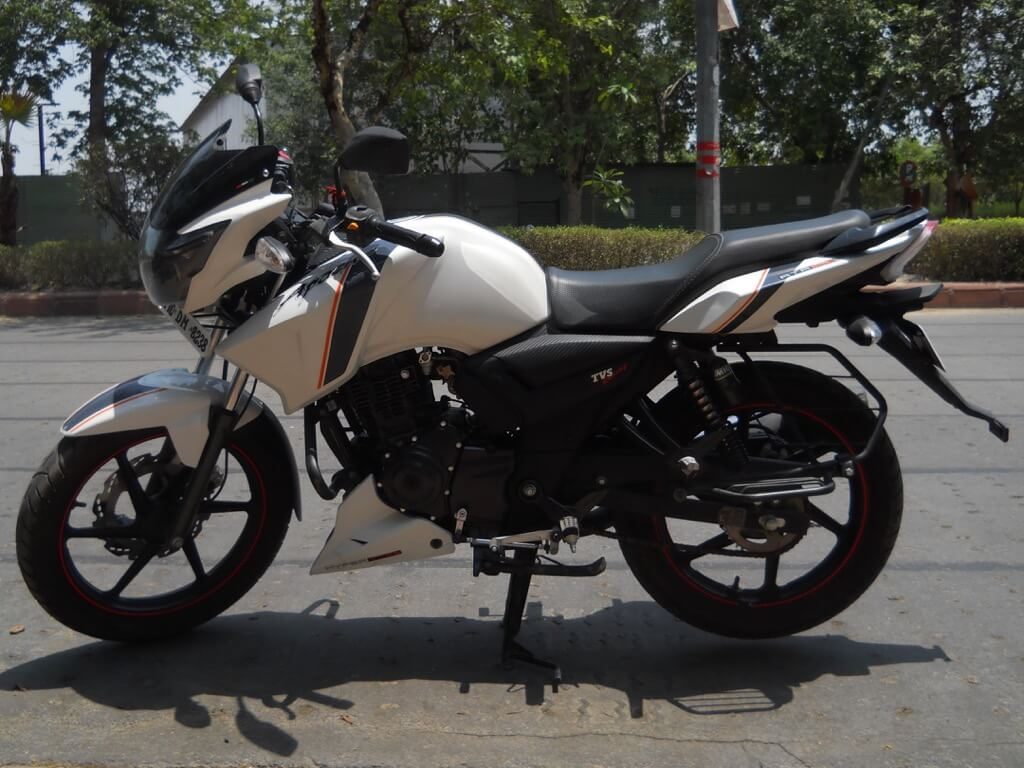 One of the crucial things missing from the package is the ABS and RLP, which TVS has promptly provided in the higher version of the same motorcycle. This is one definite aspect where the Apache RTR 160 could use an upgrade.

Following are overall technical details about the TVS Apache 160 RTR

For being the owner of an Apache 160 RTR, you would have to shell out a Rs. 74,500 in New Delhi considering it as the ex-showroom price of the vehicle. 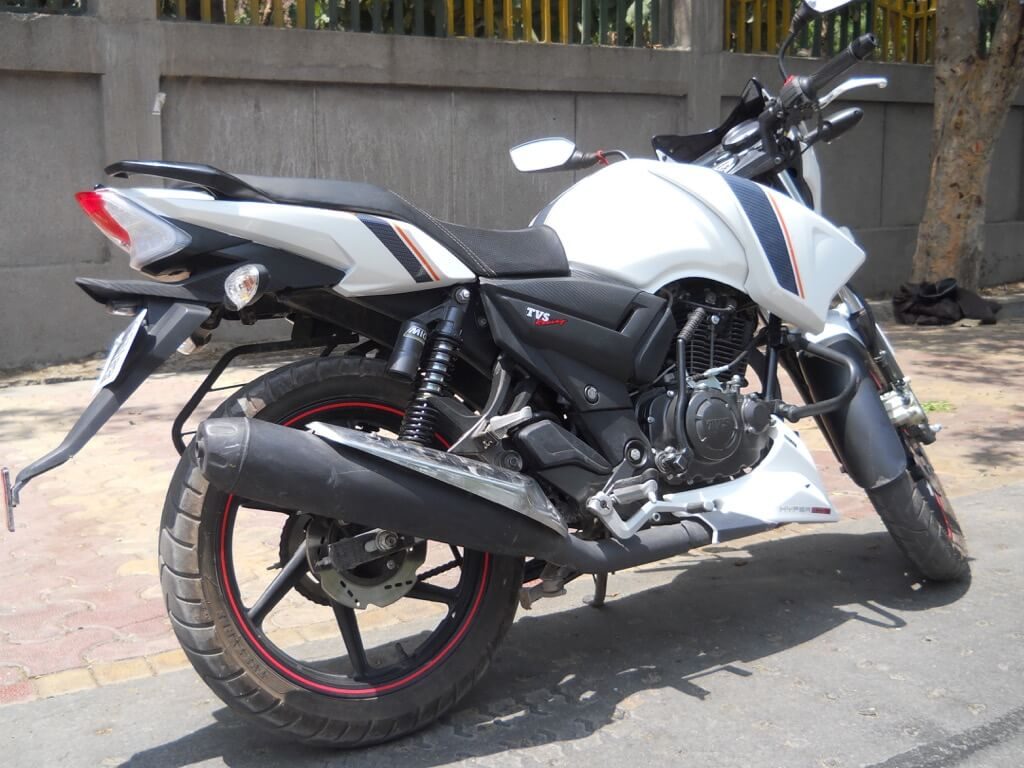 Speaking of the on-road price of the motorcycle, throw in another Rs. 16,000 and it will cover its insurance, road tax, RTO and other taxes to be paid while registering the vehicle. Hence, the entire cost of the motorcycle adds up to somewhere around Rs. 91,000. 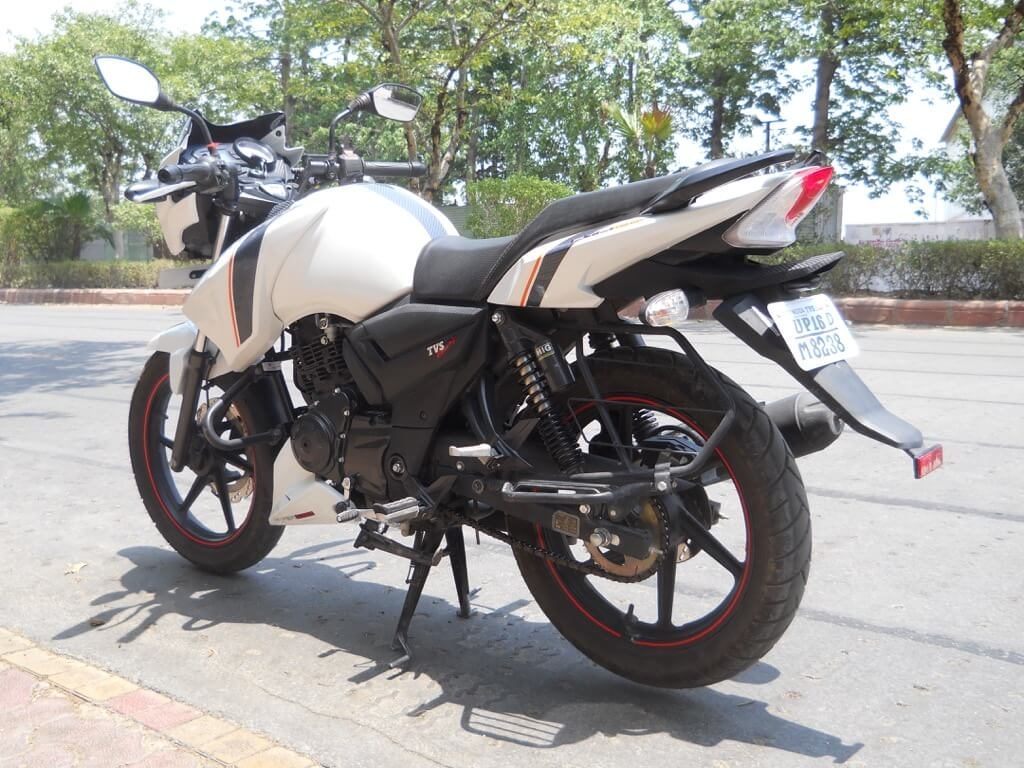 Other Features and Accessories

TVS provides a user manual and just a duplicate key of the motorcycle along with its original of course. The rest accessories such as helmet etc. will have to be paid for separately if required. 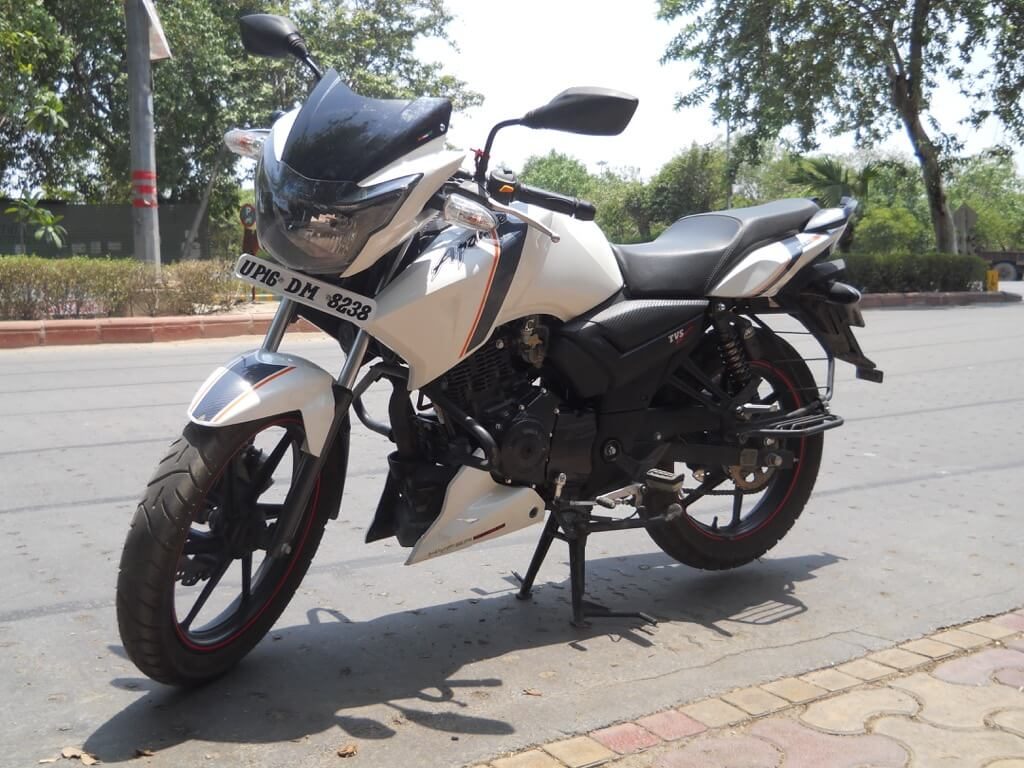 “No motorbike is perfect”, says the first law of mechanical engineering. Well, technically no, but you get the point right? Hence, after thoroughly testing the Apache 160 inside-out, here’s where I feel the latest version of the motorcycle hits its highs and lows.

For over a decade now, the TVS Apache has awed bike riders all across the country. It has stood its ground and come out as one of the most successful and dependable motorcycles that TVS has ever produced. The all new version of the Apache 160 RTR definitely has room for improvement but still it manages to outshine many motorcycles which are out there to compete with it.

The all new TVS Apace 160 is built like a racing machine, but is it one really? I would say both yes and no, but it falls more towards a category of motorcycles which are meant to fulfill the basic requirements of a daily commuter in the city traffic while still making one look good while doing it!

Motorbikes India (MI) is an online magazine about motorcycles in India. Motorbikes news, articles, clubs & events, routes, insurance, finance, maintenance & safety. We welcome contributions, from anyone that is enthusiastic about biking. If you are part of a motorbike club in India, please be sure to keep your club info and events up to date in our clubs section.
Previous The award-winning custom bagger builder shop
Next A Great Weekend For Naresh Babu And The RACR Team!! 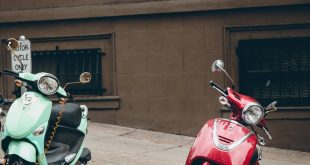 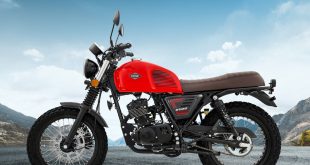 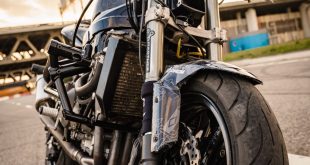 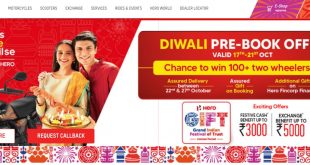